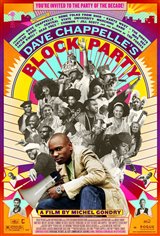 What do you do when your net worth tops $50 million? Start with a party! Dave Chappelle's wickedly funny comedy show caused a national sensation and catapulted him to a massive contract renewal. In 2004 Dave decided to unwind from the rigors of life in entertainment and throw himself a little block party.

Dave goes from the streets of his hometown to Brooklyn, picking up guests along the way. The film combines musical performances and standup comedy with documentary filmmaking.