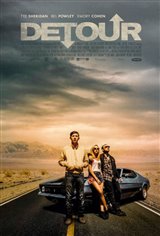 Naive law school student Harper (Tye Sheridan) is growing increasingly suspicious of his stepfather Vincent's (Stephen Moyer) involvement in the car crash that hospitalized his mother and left her in a coma. He relies on whiskey to deal with his troubles, but finds a potential solution when he enters into a conversation with grifter Johnny (Emory Cohen) and the stripper on his arm, Cherry (Bel Powley).

Employing a split-narrative structure to tell the story, the film shows what Harper's future holds if he stays home with the man he doesn't trust, and what lies ahead if he joins Johnny and Cherry on a thrilling ride of murder and mayhem.