Events Transpiring Before, During, and After a High School Basketball Game 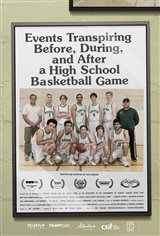 It’s game day, and Middleview High School’s woefully bad basketball team is about to face up against their rival school, who have gone undefeated for three years straight.

With coaches who don't seem to have any focus, it’s no wonder that the players not only lack skill, but also drive and motivation. Assistant Coach Brent (Andrew Phung) is determined to implement Phil Jackson's complicated triangle offense, but Head Coach Davidson (Paul Cowling) is not as ambitious, leading to them getting into a power struggle over who will coach the team. Amidst the coaching woes, benchwarmer Joel (Benjamin Arthurs) gets the team to get their minds out of the game by focusing on existentialism and the themes of The Matrix.

Outside the game, the school four-member drama club plans to make a social statement with their "postcolonial" version of Shakespeare's King Lear, but are denied by the school. Instead they try to find other ways to make their voices heard.

To top it all off, one of the referees (Jay Morberg) has to take care of his ex-wife's dog, whom he loses track of mid-game, and finds himself roaming the halls searching for the osteoporosis stricken canine.

Filmed in Canada with a mostly Canadian cast and crew.