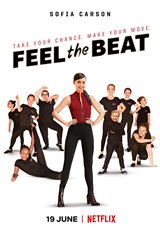 April (Sofia Carson), a self-centered but extremely talented and devoted dancer, is about to be hired for another Broadway show after a successful audition. However, when the casting director takes a dislike to her, it looks like April may not even have a career going forward. With her funds at an all-time low, she returns to her Wisconsin hometown to lay low for a bit.

Unhappy about this turn of events, when April runs into her enthusiastic former dance teacher, who asks her to train her misfit group of young dancers for a big competition, April is not interested. However, when she finds out that one of the judges will be a Broadway bigwig, and that one of the dances she'll need to choreograph features the teacher, she changes her mind, hoping that this high-profile competition could be a way for her to put the past behind her and return to Broadway.