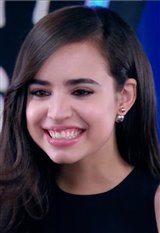 Sofia Carson was born Sofía Daccarett Char in Fort Lauderdale, Florida. She is of Colombian descent. After high school, she attended UCLA. In 2012, she launched her singing career when she was signed to BMI as a singer and songwriter. Just two years later, she made her first onscreen acting appearance with a guest role on the popular Disney Channel series Austin & Ally. Later that year, she landed a recurring role on the MTV comedy series Faking It. However, it was Disney that would make her... See All