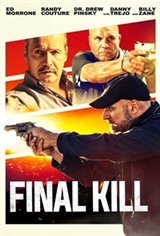 Protection specialist Mickey Rome (Ed Morrone) feels burned out from his job, but his therapist (Dr. Drew Pinsky) doesn't seem to be of much help. Mickey's boss, Carl Riser (Billy Zane), asks him to take on one last job before he calls it quits. He's sent to a sprawling Costa Rican mansion where a couple is being hidden after they stole $8 million from the mob. He hates the assignment at first, believing the mansion too large for safety and the couple too nonchalent about their own good.

However, it quickly turns deadly as a group of mafia henchman descend on the tranquil villa. Mickey discovers that there's some else going on — something sinister and underhanded. The job turns out to be far more complex than it seemed and it will take every bit of his expertise to get them all out alive.