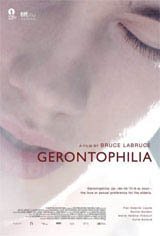 Lake (Pier-Gabriel Lajoie) has a longtime girlfriend, Désirée (Katie Boland), but realizes he has an odd fascination for elderly men.

His mother, who works at a retirement home, gets Lake a summer job as an orderly, and the young man forms a friendship with Mr. Peabody, an elderly man who lives there. Mr. Peabody charms Lake with romantic stories of his youth and confesses his dream of seeing the ocean one last time.

Lake manages to slowly wean Mr. Peabody off his daily medication without Nurse Stone, who administers the shots and pills, finding out. Lake has a plan—he wants to help his new friend's dream come true. Soooner or later, however, Lake has to come to terms with what his feelings for his new friend really are.