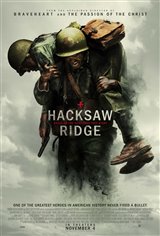 During WWII, American Desmond T. Doss (Andrew Garfield) was an Army medic who refused to bear arms. In Okinawa, during the bloodiest battle of WWll, Desmond somehow single-handedly evacuated 75 men from behind enemy lines without firing or even carrying a gun.

He was the only American soldier in WWII to fight on the front lines without a weapon, and also became the first Conscientious Objector in American history to be awarded the Congressional Medal of Honor. He was presented with the award by President Harry Truman.

In addition to the brutal Okinawa battle, Desmond demonstrated bravery, compassion and heroism during attacks in Guam and the Philippines.