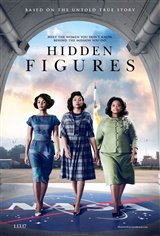 In addition to helping launch John into orbit, the brilliant women crossed gender and race lines, defied expectations and battled stereotypes. In the process, they inspired generations of people to aim high and dream big.