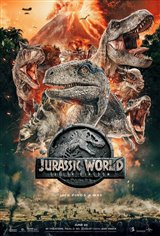 For four years, since the Jurassic World theme park and luxury resort was destroyed by dinosaurs, Isla Nublar has been left abandoned by humans while the surviving dinosaurs fend for themselves in the jungles.

When the island’s dormant volcano begins to show signs that it's about to erupt, Owen (Chris Pratt) and Claire (Bryce Dallas Howard) meet up to discuss what to do in order to rescue the remaining dinosaurs from this extinction-level event. When Owen learns Blue is still alive, he's driven to find his lead raptor, who’s still missing, while Claire has developed a deep respect for these creatures.

The two arrive on the unstable island just as lava begins raining down, only to uncover a conspiracy that could destroy the entire planet.