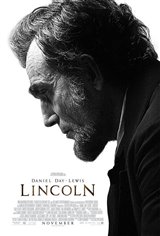 Stephen Spielberg's biographical drama follows the final months of one of America's greatest presidents—Abraham Lincoln (Daniel Day-Lewis). Lincoln and his men work to end the Civil War and abolish slavery once and for all in the United States, despite running into bigotry at every turn.

Lincoln's determination and his choices will change the fate of future American generations.

Based on Doris Kearns Goodwin's biography of the president.