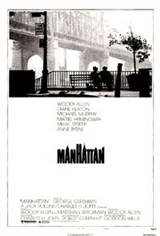 On the heels of Annie Hall, the Oscar-winning romantic comedy that rocketed Woody Allen to the front ranks of American filmmakers, Manhattan continued Allen's romantic obsessions in a slightly darker, more pessimistic vein.

Allen stars as Isaac Davis, a TV comedy writer sick of the pap he is forced to churn out and harboring dreams of being the great American novelist.

His love life is in barbed-wire territory: he is tormented by his second ex-wife Jill (Meryl Streep), a lesbian who has written a tell-all book about their marriage, and he is dating teenager Tracy (Mariel Hemingway), to whom he refuses to commit, and keeps hinting that a breakup may be imminent.

While Isaac makes a last minute, sink-or-swim decision to quit his job and devote all of his time to book writing, and neurotically moans about what the lack of a full time job will do to him (My parents won't have as good of a seat in the synagogue, he moans.

They'll be far away from God... away from the action) Yale is crippled by his lack of resolve, as indicated by his inability to leave his wife Emily (Anne Byrne). Meanwhile, Isaac and Mary) begin to fall for one another.

Tracy then tells Isaac the basic truth that none of his hung-up friends and past lovers fully realizes: You have to have a little more faith in people.

Manhattan is both a seriocomic dissection of perpetually dissatisfied New Yorkers and an ode to the city itself, filmed in glorious black-and-white by ace cinematographer Gordon Willis, and set to a score of rhapsodic George Gershwin music.