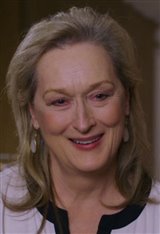 MERYL STREEP Date of Birth: June 22, 1949 Opera's loss was the cinema's gain when Streep, who began taking voice lessons for opera at 12, developed an interest in acting while in high school. She later majored in drama at Vassar, studied playwrighting and costume design at Dartmouth, and then went on to do graduate work at the Yale School of Drama. That early voice work has always come in handy as Streep's been able to use her training to dig up any accent you can think of and apply it to the... See All