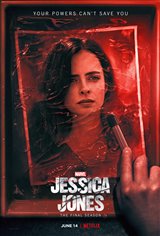 In season 1, after her superhero career crashed and burned in a tragic incident, Jessica Jones (Krysten Ritter) rebuilds her life as a normal citizen working as a private detective in Hell's Kitchen, New York. However, her past seems to keep catching up to her in the form of various maniacal supervillains.

In season 2, Jessica tries to investigate the mysterious experiments that led to her powers. She also deals with the traumatic fallout from the first season.

In season 3, Jessica and Trish (Rachael Taylor) struggle with their fractured friendship. When Jessica crosses paths with a highly intelligent psychopath, she needs to team up with Trish. Can they mend their friendship despite their different views on heroism?