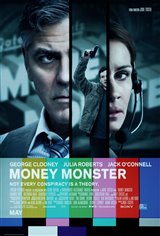 TV personality Lee Gates (George Clooney) gives insider tips on air, aimed at everyday people, which has earned him a title as the money guru of Wall Street. A young man named Kyle (Jack O'Connell) watches the show and places all of his family's money on a tip from Gates.

When the tip proves to be bad and the money is all lost, Kyle goes to the station and takes Lee and his entire show hostage on air. He threatens to kill Lee unless he gets the stock up 24 and a half points before the bell.

The show's ratings soar as the entire country tunes in to watch the hostage situation unfold. At the same time, the crazy happenings put a light on a possible scandal.