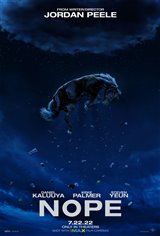 After the mysterious death of his father on their California ranch, OJ Haywood (Daniel Kaluuya) tries to keep the business of providing Hollywood with trained animals going. However, he doesn't have the gift of gab that his father had, so his sister Emerald (Keke Palmer) returns to help out and keep the ranch afloat. While staying at the ranch, supernatural occurrences affecting human and animal behavior begin to be noticed by the siblings.

Although OJ was told that his father died of debris falling from a plane, he and Emerald begin to believe that their father's death is related to a giant cloud-like UFO appearing in the sky that shuts down the power. They go buy cameras with back-up batteries in order to capture proof of its existence on camera, where they get help from tech salesman Angel Torres (Brandon Perea). They also convince documentarian Antlers Holst (Michael Wincott) to join them in their investigation, because he uses cameras that are powered by being wound by hand, like old fashioned Hollywood cameras.

Michael Wincott, who plays Antlers Holst, was born and raised in Toronto, Ontario.