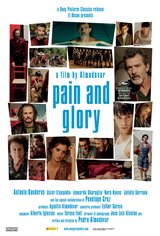 Salvador Mallo (Antonio Banderas) is a famous movie director who has decided to retire, mainly because he has to endure chronic physical pain, partly related to his recent surgery. He also suffers from anxiety and depression, and is still grieving the death of his mother four years earlier. Salvador tries smoking heroin as a way of coping with his pain.

At the same time, Salvador looks back at his life and work as he watches an old film and remembers the star, Alberto Crespo (Asier Etxeandia), with whom he fought at the time and hasn’t spoken with since. While under the influence of drugs, Salvador reminiscences, especially of his mother (Penélope Cruz), when she was young and also when she (Julieta Serrano) was older, during her final days.