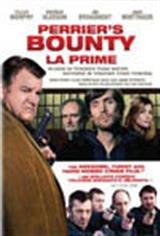 Anti-hero Michael McCrea (Cillian Murphy) is the perfect boy next door—or upstairs, if you're his best friend Brenda. Night after night, he patiently listens to Brenda's lamentations about her boyfriend Seamus's cheating heart. A real catch, right? The unfortunate matter is that Michael is estranged from his father, Jim (Jim Broadbent). And he owes Dublin's most ruthless gangster, Darren Perrier (Brendan Gleeson), a lot of money.

Perrier's Bounty follows Michael during two whirlwind nights in the city. On the first night, he confronts his ailing dad, takes a swing at Seamus at the pub, seeks a loan for his debts, burgles a home, participates in blackmail and is implicated in the accidental murder of one of the crime lord's goons. For his deeds, a ten-thousand-euro bounty is placed upon the heads of him, Brenda and Jim. The twenty-four hours that follow are a veritable game of cat and mouse, with a trail of mishaps and mayhem left across Dublin as Perrier's gang closes in. Michael's fight to save his skin is complicated when he is forced to confront his emotions toward the eccentric Jim, who washes down coffee grounds with cold water, and Brenda, who is morose to the point of being suicidal after getting dumped by Seamus.