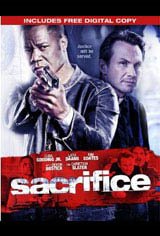 In SACRIFICE, it's a harsh, cold world, but it's even tougher for a little girl trapped as a pawn in an underground drug ring. When drug dealer Mike tries to get his five year-old sister Angel and himself out of the dangerous heroin trade, he enlists the help of tough undercover cop John Hebron.

While trying to save his sister's life, Mike gets killed, leaving Angel in John's hands. The drug lords kidnap Angel and threaten to kill her if John doesn't help them. Against his own conscience, John is forced to use everything he learned from his undercover days to save the little girl before time runs out.