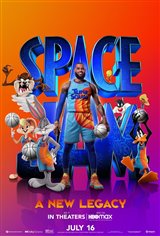 NBA superstar LeBron James just can't seem to connect with his son Dom (Cedric Joe), who dreams of becoming a videogame developer, because he enjoys creating games more than playing them. LeBron and Dom's world gets flipped upside down when the two of them get sucked into the Server-Verse, a digital space controlled by a rogue A.I. named Al-G Rhythm (Don Cheadle). For LeBron to save his son and bring them back home, he first must defeat Al-G Rhythm on the basketball court.

Sent to the Toon World, a world filled with iconic cartoon characters, LeBron must recruit and lead Bugs Bunny and his gang of Looney Tunes to victory over Al-G Rhythm's new and improved Goon Squad, consisting of real-life basketball stars such as Klay Thompson, Anthony Davis, Damian Lillard, and many more, in order for him and Dom to return back home.