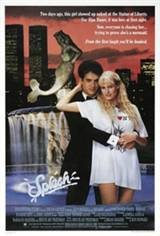 I'm in love with a mermaid! read the opening line of Leonard Maltin's original review for Splash. And with the delightful Darryl Hannah in the lead, who could fault Maltin for his public declaration of ardor? The story begins in 1959, when a young boy is rescued from a watery grave by an adolescent mermaid.

Twenty-five years later, the boy has grown up--and lo and behold, it's Tom Hanks. Meanwhile, the mermaid, likewise grown up, has surfaced in search of Hanks, her long-lost love. On dry land, the mermaid is able to walk about on legs; any contact with salt water, and she reverts to her half-fish form.

Adopting the name of Madison from a New York street sign, the girl manages to win Hanks' heart. Alas, a secret government lab, populated by such smarmy types as Richard B. Shull and Eugene Levy, captures Madison for research purposes--and possible vivisection.

Egged on by his brother John Candy, Hanks rescues his beloved, joining her in the ocean depths as a mer-man (mer-fellow? mer-guy?) A captivating confection from the peerless creative team of director Ron Howard and screenwriters Lowell Ganz and Babaloo Mandel, Splash was a winner all the way--especially at the box office, where the $11 million film racked up a huge profit.