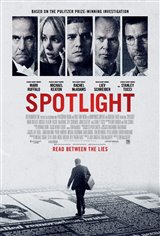 When newly-hired senior editor Marty Baron (Liev Schreiber) at the Boston Globe insists that the members of "Spotlight" — a four-person investigative team led by editor Walter Robinson (Michael Keaton) — do an investigation into the child abuse perpetrated by Catholic Church clergy, he's initially met with resistance.

He doesn't back down and once the reporters start digging, they're shocked when they uncover a massive conspiracy to cover up years of child abuse, involving hundreds of children in the Boston area, perpetrated by at least 87 pedophile priests.