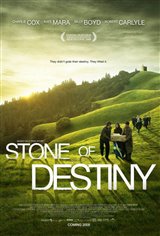 Scotland, 1950. With Scots nationalism waning under the weight of Britain's rule, four university students, led by Ian Hamilton (Charlie Cox), make a dramatic gesture to reawaken their country's pride. Despite having little money and even less experience, they cunningly break into Westminster Abbey in the wee hours of Christmas morning and "liberate" that most powerful symbol of Scotland's nationhood—The Stone of Destiny. Although they are finally captured, and the Stone taken back to London, their mission renews Scottish pride and the call for independence.