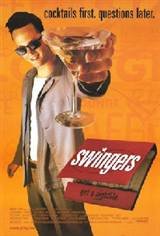 An ensemble comedy about five guys, all in their 20s, all coping with the mysteries of life and women, set in the back streets and sometimes hidden clubs of Hollywood. It's a story told in the language of the "cocktail nation," a growing 20-something, retro-Swing dance movement that's taken Hollywood by storm and is beginning to sweep the nation.

Mike is down in the dumps because he left his girlfriend behind in New York when he came to Hollywood to seek his acting fortune. Instead, he's found loneliness and the blues. Now, after six months of dealing with Mike, his buddy Trent and the other swingers have had enough. It's time to bring Mike back to life.