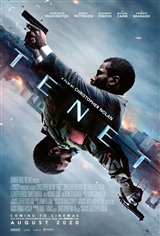 In this international spy thriller from writer/director Christopher Nolan, a man known as the Protagonist (John David Washington) chooses to die rather than give the names of his colleagues. When he comes to in a hospital bed, he discovers it was a test and he has passed it.

He joins a group of international spies, all of whom are all trying to prevent World War III. He is given the code word “tenet,” which should open both the right – and wrong – doors to help save the entire world. He is introduced to the concept of time inversion, where you're not shooting bullets, but catching it.

He is tasked with hunting down Russian arms dealer Andrei Sator (Kenneth Branagh), who is planning to start World War III. The Protagonist teams up with English spy Neil (Robert Pattinson) and together, through bold moves and the power to reverse the flow of time, they must save the people in the future – and the present.