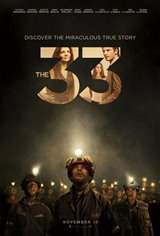 When the San José copper and gold mine in Chile collapsed in 2010, 33 miners were trapped more than 200 storeys underground.

Temperatures in the mine reached 100 degrees Fahrenheit beneath a boulder twice the size of the Empire State building as they were trapped there for 69 days. The ordeal represented the longest underground survival in history.

Based on the book "Deep Down Dark" by Hector Tobar, which is based on true events.