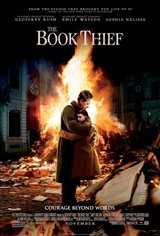 A young girl named Liesel (Sophie Nélisse) is sent to live with a German foster family during World War II because of her mother's communist ties. She finds it difficult at first to adjust to her new family, until her new father (Geoffrey Rush) teaches her to read a book she found.

She soon gets through the book and thirsts for more to read. Following a book burning in the town square, she pulls a book out of the fire. Meanwhile, Max, a young Jew who is a friend of the family, comes to the door to escape being captured by the Nazis. As her adoptive parents nurse him to health, Liesel grows attached to Max, reading to him as he spends long hours hiding in the basement of their home.

Based on the novel by Australian author Markus Zusak.