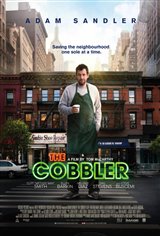 Max (Adam Sandler) owns and operates a shoe repair shop in New York City that has been in his family for years. However, he feels unfulfilled and tired of his daily routine. When a local thug named Ludlow (Method Man) brings in a pair of shoes to be fixed, Max feels pressure, especially when his stitching machine breaks down before the job is finished.

He finds a family heirloom that does the trick, and when he tries on the shoes himself and checks out his image in a mirror, he discovers to his shock that he now looks like Ludlow. He soon realizes that every pair of shoes he stitches with the old machine enables him to impersonate his customers, and he uses that to his advantage.