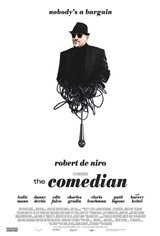 Aging comedian Jackie (Robert De Niro), who was once the star of a successful TV sitcom called Eddie's Home, has fallen on hard times. He's having difficulty finding work and when his agent finally gets him a gig in a club on "TV Sitcom Nostalgia Nite" alongside other former TV stars Jimmie Walker from Good Times and Brett Butler from Grace Under Fire, he blows it by attacking a member of the audience for filming his act.

While serving community service at a soup kitchen, he meets Harmony (Leslie Mann) and offers to take her out to the Comedy Cellar when she has a bad day that leaves her in tears. She reluctantly accepts, but only after he agrees it's not a date. At the club, he and the comedian onstage trade insults, much to Harmony's amusement. They have such a good time that Jackie convinces Harmony to accompany him to a family wedding. Things slowly begin to turn around for Jackie when his agent books him a gig at a retirement home. The show, which goes well, is filmed and put online. The video goes viral and he's asked to make appearances on high-profile talk shows such as Jimmy Kimmel Live and The Tonight Show starring Jimmy Fallon.