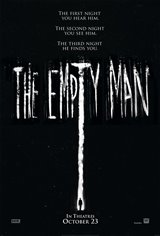 On the first night, you hear him. On the second night, you see him. On the third night, he finds you and will make his way into your thoughts. When the group of teens begin to mysteriously disappear, a retired cop investigates and struggles to make sense of the stories he's told by the locals about The Empty Man.

As he delves deeper into the mystery, and the horrific, mystical entity, soon his life—and the lives of those close to him—are in grave danger.

Based on the Boom! Studios graphic novel by Cullen Bunn.