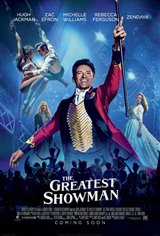 When the company P.T. Barnum (Hugh Jackman) works for goes bankrupt, he loses his job and has a difficult time supporting his loving wife Charity (Michelle Williams) and their two young daughters. Discouraged by how his life has turned out, he manages to turn things around when he gets an idea.

After getting a loan from the bank, Barnum gathers objects to start a museum. When that doesn't bring in audiences, he gets together unique and talented people to create a show like nothing that's ever been seen before. He also teans with wealthy playwright Phillip Carlyle (Zac Efron), in order to appeal to the higher class.

However, when he meets singer Jenny Lind, known as the so-called Swedish Nightingale (Rebecca Ferguson), and hires her to perform in America, things begin unraveling.