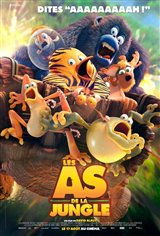 Having been rejected by The Jungle Bunch and their leader, Natacha the tiger, a koala named Igor destroys their habitat by using explosive mushrooms. After exiling Igor on an isolated island, Natacha drops everything to devote her life to raising Maurice, a baby penguin she has rescued from the sea. Maurice grows up thinking he is a tiger, too.

He develops martial arts skills and when he grows up, he gets The Jungle Bunch back together, without his mother’s knowledge. Meanwhile, Igor, who has finally managed to escape from his island, is intoxicated with the idea of getting revenge.