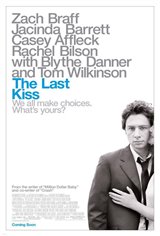 Watch Trailer
With his thirtieth birthday right around the corner, Michael (Zach Braff ) is thrown for a loop when his long-time girlfriend Jenna (Jacinda Barrett) announces she's pregnant. As he contemplates his impending fatherhood and the commitments he faces, Michael finds himself increasingly drawn to Kim (Rachel Bilson), an 18-year-old with whom he shares an undeniable chemistry.

Meanwhile, Michael's closest friends, Chris (Casey Affleck) and Kenny (Eric Christian Olsen), are reluctantly grappling with their own responsibilities and contemplating a trek across South America, while Jenna's parents, Anna (Blythe Danner) and Stephen (Tom Wilkinson), are tiring under the weight of many years of marriage and looking for a new spark.