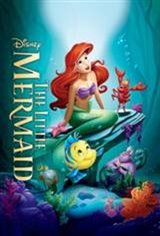 Disney's The Little Mermaid was the first in a series of blockbusters that restored the venerable firm's reputation as the world's premiere animated-feature factory. The title character is a precocious teenager named Ariel, the daughter of Triton, king of the Sea. Against her dad's wishes, Ariel journeys beyond her own world to the surface, where she falls in love with Prince Eric, a handsome human. Foolishly, the little mermaid enters into an agreement with evil sea witch Ursula in order to become human herself. The wistfully melancholy ending of the original Hans Christian Andersen story is dispensed with in favor of a joyously happy ending-but not before a spectacular climactic confrontation between Ursula and Triton. The obligatory Disney comic relief is handled by such freshly minted characters as Sebastian the Crab, who, courtesy of voiceover artist Samuel E. Wright, sings the film's Oscar-winning Under the Sea. Other voices are provided by Broadway star Jodi Benson (as Ariel) and such Hollywood reliables as Buddy Hackett, Pat Carroll, Kenneth Mars, and Rene Auberjonois. The enormous box-office take of The Little Mermaid made possible such future Disney cartoon ventures as Beauty and the Beast, Aladdin, Pocahontas, and The Hunchback of Notre Dame.