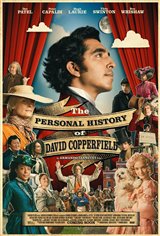 Born six months after the death of his father, David Copperfield (Dev Patel) is lucky to have his loving mother. But when his mother marries the dour Edward Murdstone, who doesn't like David, the boy is shipped off to live with his housekeeper's family, in an upturned boat on a beach.

This will prove to be only the first of David's numerous temporary abodes, which include an oppressive boarding school run by a ruthless headmaster, and the home of his eccentric aunt Betsey Trotwood (Tilda Swinton), whom he's never seen, because she was disappointed at his birth that he wasn't a girl. Wherever David goes, whether living in poverty or comfort, he writes pithy impressions of all those he encounters — impressions that will one day constitute his autobiography.