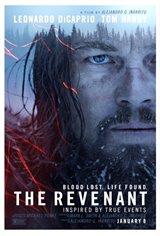 In the 1820s, frontiersman Hugh Glass (Leonardo DiCaprio) is brutally attacked by a bear and left for dead deep in the uncharted American wilderness by members of his own hunting team.

Guided by sheer will and the love of his family, Glass navigates a hostile environment, a frigid winter, and unfriendly Native American tribes in his quest to survive.

Inspired by true events and based in part on the novel by Michael Punke.

Canadian Connection: Filmed in Alberta and British Columbia. Some cast and crew members are Canadian.