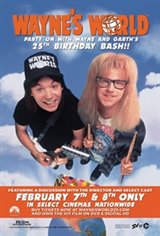 The show comes to the attention of a sleazy network executive (Rob Lowe) who wants to produce a big-budget version of "Wayne's World"-and he also wants Wayne's girlfriend, a rock singer named Cassandra (Tia Carrere). Wayne and Garth have to battle the executive not only to save their show, but also Cassandra.

Director Penelope Spheeris, Myers and Carvey hang a lot of silly, but funny, jokes on this thin plot, and the energy of the cast-as well as the wild pop-culture references-make Wayne's World a cut above the average Saturday Night Live spin-off movie.The film includes a theatrical exclusive special event with an introduction by Peter Travers (Rolling Stone Magazine and ABC-TV), and a videotaped chat with the director and cast members after the film.