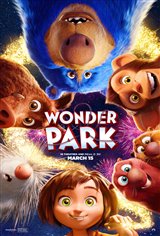 When June is a little girl, she and her mother create a model version of an amusement park. June's imagination comes alive as she envisions herself on all the rides. They even create characters who inhabit the park.

Years later, when June hits her teens, she's not as interested in things such as model amusement parks. However, when she goes for a hike in the woods, she discovers a car from a roller coaster hidden under some branches and vines. When she pulls the branches away and hops on, the car begins moving and she discovers she's in the exact amusement park she and her mother dreamed up, complete with all their beloved characters.

There's only one problem. The park is being overrun by cute but very naughty chimpanzombies. June decides to team up with the characters in an effort to clean up the park and make it wonderful again.