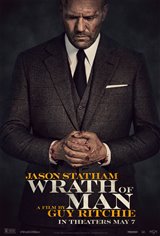 Fortico Security specializes in transporting hundreds of millions of dollars in cash trucks across Los Angeles each week. The newest edition to their team, H (Jason Statham), whose past is unknown to his colleagues, surprises his team when he takes complete control of a heist, taking care of the situation with ease, efficiency, and precision. Hit after hit, it begins to seem like H wants cash trucks to be attacked, leaving his teammates wondering who he really is and where he came from.

It turns out that H was injured trying to protect his son, who lost his life caught in the middle of a hit on one of Fortico's cash trucks. Bearing a grudge and driven by vengeance, H sets his sight on catching the scum who took his son's life, using his opportunity with Fortico Security to track them down.

Based on the 2004 French film, Le convoyeur (Cash Truck).