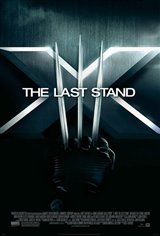 Professor X (Patrick Stewart), Wolverine (Hugh Jackman) and the rest of the gang return to the big screen in this third installment of the X-Men series.

The superhero film’s ensemble cast returns to battle Magneto’s (Ian McKellen) newly-formed army of mutants, who prove themselves a powerful force to be reckoned with. At the same time, a new “cure” that eliminates the x-gene divides the mutants, with some of them interested in a “normal” life while others believe that it will be used to exterminate their species.