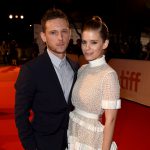 Film Stars Don’t Die in Liverpool co-stars Jamie Bell and Annette Bening were on the red carpet at Roy Thomson Hall in Toronto at TIFF to promote their new film, which is based on a true story. Jamie is pictured here with his new bride, actress Kate Mara.

Jamie Bell: Fatherhood can be monotonous

Jamie Bell finds fatherhood can be ”monotonous”.The ‘Fantastic Four’ actor has a two-year-old son with estranged wife Evan Rachel Wood and though he hates missing out on parts of his little boy’s life when he is in the care of the actress, he also …

Evan Rachel Wood and Jamie Bell have split up.The couple, who got married in October 2012 and welcomed their first baby boy into the world last July, have confirmed they have ended their marriage.A spokesperson for the duo told UsMagazine.com: ”Evan …

Evan Rachel Wood has given birth to a baby boy. The 25-year-old actress and her actor husband Jamie Bell have confirmed the arrival of their "beautiful boy" but gave no other details. Her representative said: "Evan Rachel Wood and her h…

Evan Rachel Wood and Jamie Bell are rumored to have wed.The couple – who got engaged last year but declined to ever officially confirm the news – was spotted wearing matching rings on their wedding fingers as they arrived at Los Angeles International …

Jamie Bell and Daniel Craig to star in Tintin

Paramount Pictures and Sony Pictures Entertainment announced that principal photography on the 3D feature film The Adventures of Tintin: Secret of the Unicorn, directed by Steven Spielberg, has begun. The film will have an al...

Jamie Campbell Bower is reportedly dating Lily Collins after splitting from his fiancee Bonnie Wright.The 23 -year-old actor is thought to have called off his engagement with Harry Potter actress Bonnie, who played Ginny Weasley in the saga based on J…

What happens when a century old vampire and 17-year-old high school student fall in love? They get married, of course. Well, they do if they’re Edward Cullen (Robert Pattinson) and Bella Swan (Kristen Stewart) – a mysteri...

Jamie Lynn Spears’ aunt, Chanda McGovern, believes Jamie Lynn got pregnant because she wanted to get some of the attention that is placed on her sister Britney. Chanda said in an interview with Splash video: "I do believe J...