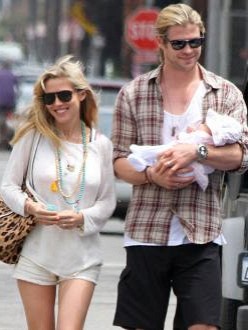 Chris Hemsworth's wife and daughter "run the show" in his family. The Thor actor - who has six-month-old daughter India with spouse Elsa Pataky - is the least listened to person in his household and he can't see the situation ever changing. Speaking after being named Man of the Year by Empire magazine, he said: "It's very nice, what does that mean? Man of the Year? I'd love to be man of the house but with my wife and now my daughter I don't think I'll ever hold that title! They certainly run the show." Chris, 29, also admitted he worries he and actor brother Liam Hemsworth sound like they were raised in a "feral" household when they discuss their upbringing in Australia, because he had a very loving and stable childhood. He added: "I've said to my brothers - well, Liam anyway - 'Man we've got to stop talking about getting into fights as kids because we sound like we're from some feral, rough family, and it's bulls**t.' We grew up in the bush sometimes, but we had a great childhood and great parents. It was what led us to being actors; they were always incredibly supportive. There was nothing else I wanted to do."