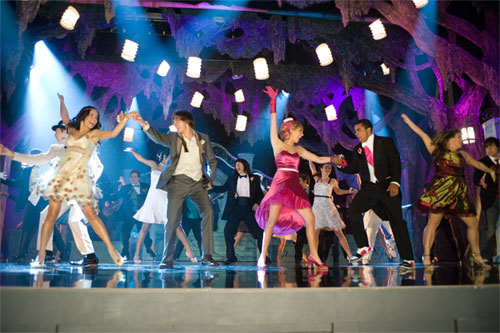 Ashley Tisdale, Vanessa Hudgens and Zac Efron return in High School Musical 3: Senior Year. Will it be their last?

How on earth did something that was meant to be a cute Disney Channel movie wind up being one of the most successful made-for-television movies of all time?

When High School Musical first aired in January 2006, no one expected it to become the phenomenon that it proved to be. High School Musical wasn’t even supposed to be the name of the finished project—it was the working title. When no one came up with anything better, the producers reluctantly went ahead with the generic name, and an incredibly successful franchise was born. 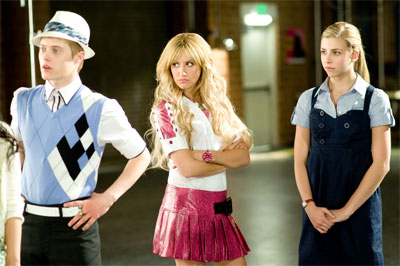 It was inevitable that a sequel be made, and when High School Musical 2 debuted the cast members became instant sensations and teen icons. In High School Musical 3: Senior Year, all the main characters are back, but it may be the last time audiences see them together. New, younger characters will be introduced alongside the familiar faces, with the idea of carrying on the franchise when the older, more established and beloved characters head off to college.

Ashley Tisdale, who plays self-obsessed Sharpay Evans, says the entire cast was emotional while filming the final scenes of the movie. “We were crying and just so emotional over the whole thing,” Tisdale said. “We went into the last day thinking, ‘It’ll all be fine ’cause we’re all really good friends and we’re so close.” Although Tisdale confirms a High School Musical 4 is in the works, she says that she and her main costars will not be involved. “We have nothing to do with it. I think we’re all doing other projects and moving on. We’re so attached to each other. We’ve had such fun doing these movies. It’s definitely something that’s tough to leave and say goodbye to.”

In HSM3, Troy (Zac Efron), Gabriella (Vanessa Hudgens) and the rest of the gang have reached their senior year, and they’re busy preparing for prom, a basketball championship and a spring musical. It’s a time to celebrate, but as the students realize they’re heading in different directions once senior year comes to an end, it’s also bittersweet. Especially for Troy and Gabriella, who try to make every moment last when it seems that their relationship’s future is questionable as they’re pulled in different directions.

Despite the enormous success and fan adoration they’ve enjoyed, the film’s stars have managed to remain impressively modest. Zac Efron, who plays a basketball star, has emerged as a major teen heartthrob, but is amazingly down to earth. “I’m just very grateful that I get to do this every day, to sing, dance and be with my friends,” Efron told The Telegraph. “It’s crazy that we even get paid for it. I never set out to be a star. Acting was just something I loved to do and always had fun with. I also think there’s a lot of luck involved and being in the right place at the right time.”

His roles prior to HSM were mostly drama, and Zac admits it was hard to learn the dance moves for the film. “I’m definitely not a dancer,” Efron says. “I grew up being 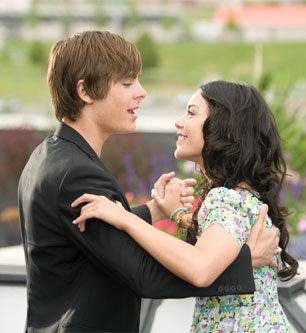 into sports and I wasn’t trained to move my body in the right way for dancing. I’m the last one to get any move correct. In rehearsals it’s always, ‘Okay, one more take for Zac.’” Although he had basketball experience Efron, who stands 5’9″, never expected to portray a star player onscreen, especially since he still remembers losing a game for his school team. He jokes: “It’s much more fun now because it’s usually in the script that we win.”