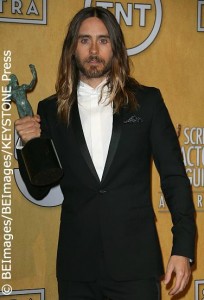 Although Dallas Buyers Club has been a very popular film this award season, one star of the film has not seen the full film yet. Jared Leto, who plays Rayon, a transgender AIDs patient, told People Magazine on Saturday at the Screen Actors Guild awards, “I haven’t seen the film.” He went on to say, “I thought it was better to get some perspective first and let the film marinate. I’ll watch it one day.” Jared has picked up several awards for his work on the film and has received over 50 nominations. He has won a Golden Globe for Best Supporting Actor in a Motion Picture and won a Screen Actors Guild award for Outstanding Performance by a Male Actor in a Supporting Role. He is currently nominated for an Academy Award for Best Performance by an Actor in a Supporting Role. Jared was very passionate of his role and underwent several painful experiences to prepare for the role. In 2012, he revealed on Instagram that he had waxed his legs for the role. He also plucked his eyebrows. In his acceptance speech at the Hollywood Film Festival where he won Breakthrough Actor, he revealed he waxed his whole body for the role.