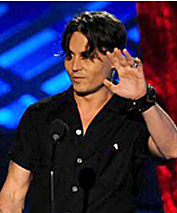 Johnny Depp is reportedly getting a $61 million paycheck to reprise his role as Captain Jack Sparrow in a fourth Pirates of the Caribbean film. The outrageous sum is the largest upfront payment in film history (Tom Hanks earned $58 million for the Da Vinci Code sequel, Angels and Demons earlier this year) and will move Depp, 45, to the top of Hollywood’s rich list. Earlier this year, Will Smith, who  grossed $76 million in one year, was named the highest earning actor in Hollywood by Forbes magazine. A source said: “It’s a hell of a lot of money for one movie but there’s only one man who can play Captain Jack Sparrow — and that’s Johnny Depp. “Pirates just wouldn’t be the same without him, so they were more than willing to smash the record books to land Depp again. The first three films have earned $2.7 billion at the box office.  It’s no surprise that Disney executives want Jack back and they are willing to pay big bucks to get him.” Depp’s Pirates’ salary will raise his earnings to $137 million. Orlando Bloom and Keira Knightley, Depp’s co-stars in the first three films, are not expected to appear in the latest installment.