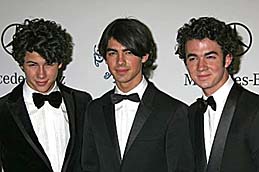 Nick, Kevin and Joe Jonas, aka The Jonas Brothers, have signed on to make their big screen debut alongside younger brother Frankie. They’ll appear in Walter the Farting Dog, based on the bestselling series of books. The brothers will play musicians whose sickly great-aunt asks them to care for her incredibly smelly canine companion. While they’re driving the dog home, the older brothers stick their heads out of the car to avoid the stench, but Frankie, who has a sinus problem, can’t smell it. The youngest brother and Walter get involved in a series of adventures involving a team of jewel thieves. Shooting begins in Spring 2009. Nick, Joe and Kevin starred in the Disney Channel movie Camp Rock and will soon get their own Disney series as well.