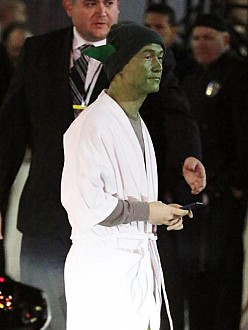 Joseph Gordon-Levitt dressed up as Yoda at the Hollywood premiere of Star Wars: The Force Awakens.

The 34-year-old actor channeled his inner Jedi Master by donning green face paint, elf ears and a white bathrobe on the red carpet at the TCL Chinese Theatre in Los Angeles on Monday night.

The (500) Days of Summer star is clearly a huge fan of the popular sci-fi franchise and even said he’d be up for starring in the next movie if asked.

Many other Hollywood stars proved they were super-fans of Star Wars at the star-studded event.

Each star posed on the red carpet alongside Stormtroopers and robots C-3PO, R2-D2 and BB-8.