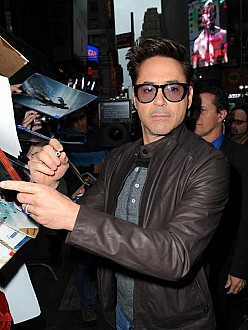 Robert Downey Jr. has been named Hollywood's highest paid actor for the second year running. The 49-year-old star - who earned an estimated $75 million for the year 2012 and 2013 - has topped Forbes' annual ranking of the highest paid movie stars after making a fortune from his portrayal of Iron Man. Dwayne 'The Rock' Johnson came in second place with an earning of $52 million, which he accumulated from a number of acting roles as well as producing gigs. Bradley Cooper, 39, followed behind with an estimated $46 million due to his roles in The Hangover and American Hustle, while Leonardo DiCaprio, 39, secured fourth place with $39 million. Chris Hemsworth finished off the top five with an estimated earning of $37 million after beating Liam Neeson and Ben Affleck, who earned $36 million and $35 million respectively, to the place.

Will Smith and Mark Wahlberg fell to the bottom of the top 10 list with an estimated annual earning of $32 million, while Johnny Deep, Brad Pitt and Tom Cruise all failed to secure a place on the chart.