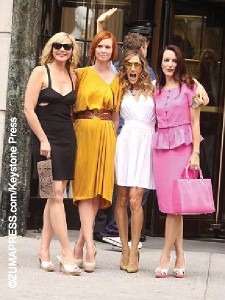 Sarah Jessica Parker recently reignited a hope that was once lost: the possibility of another Sex and the City reunion on the big screen. In the February 2014 issue of InStyle magazine, the star, who plays sophisticated fashionista Carrie Bradshaw, revealed that Sex and the City 3 could become a reality. Parker said she believes: “There is one last chapter to tell.” She also suggested that any efforts to make a third film should be made as soon as possible, saying, “It isn’t a decision that can wait forever.” The fashion icon isn’t the only cast member who spilled the beans on a possible reunion. Kristin Davis, who plays art dealer-turned-mom, spoke with Haute Living in December about a third installment of the popular series: “I don’t think [a third film] is a pipe dream, there is discussion.” While she didn’t confirm another big screen reunion would actually happen, she said, “It would be very exciting if it did.” ~Yara Matar