Take a hilarious ride with the CHIPS team – Blu-ray review 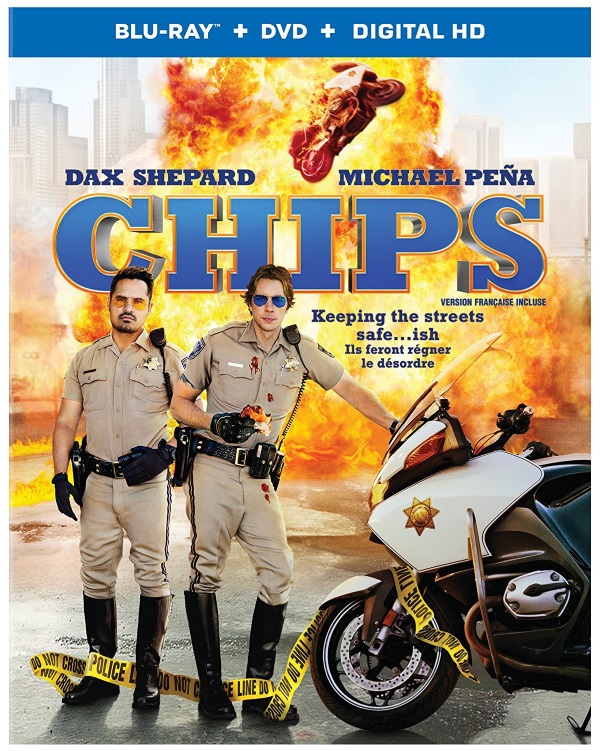 Forty years since the hit TV series of the same name debuted on NBC, CHIPS the movie follows California Highway Patrol officers Jon Baker (Dax Shepard) and Frank “Ponch” Poncherello (Micheal Peña) as they hit the road on their motorcycles to figure out who within their department is involved in a violent heist that resulted in the death of one of their officers.

The film starts out with a bit of back story on each of the characters and how they get into the California Highway Patrol. Jon Baker, a former motorcycle race champion, wants to join the highway patrol to hopefully win back his wife, Karen (Shepard’s real life wife, Kristen Bell), whose father was a cop.

Unfortunately, his body has seen better days. Older than most of the recruits, he’s not exactly up to snuff for the rigors of the department. But pity is the name of the game, and he gets it from the deciding sergeant, so he’s in… as long as he doesn’t screw up, of course.

Micheal Peña’s character, given the alias Frank “Ponch” Poncherello, is sent undercover by the FBI to figure out who in the California Police Department is crooked. Lucky him, he’s paired with the new misfit recruit, Jon.

While the two get off to a rocky, albeit funny, start, they eventually become the very definition of a “buddy cop” team. That was my favorite part of this film — the dynamic shared between Shepard’s and Peña’s characters. The two actors’ chemistry together is undeniable and I enjoyed seeing them bicker with each other and ultimately team up to kick some crooked-cop ass.

While the film wasn’t exactly side-splitting funny, it exceeded my expectations. I’ve never seen the TV series on which the film is based, but I expect this was quite a departure for the fans of that show, which I’m sure was ’70s and ’80s PG. Though rated only 14A, the film was pretty vulgar and may rub some of the classic TV show fans the wrong way. But regardless, if lighthearted chuckles and a fun “buddy cop” comedy with cool chases and action scenes are what you’re looking for, you’ll find it all in CHIPS.

This film comes loaded with 10 deleted scenes. If that’s not enough, the director and star of the film, Dax Shepard, gives fans an idea of how he took on the classic TV series and used it to inspire his hilarious (and sometimes racy) film adaptation. He then goes on to talk about the stunt vehicle rigging crew and how they made the action that much bigger. Finally, he gets to the film’s other main star, the Ducati motorbike.

Seen CHIPS? Take a moment to tell us what you thought of the film by rating and reviewing it here! ~Alexa Caruso